The King of Wands Tarot Card

The Page of Swords Tarot Card

The Knight of Pentacles Tarot Card

Journey to the enchanting world of The Sacred Isle Tarot!

The Sacred Isle Tarot takes the Rider–Waite–Smith imagery to new heights. The deck’s stunning beauty, dazzling scenery, and luscious colors endow the familiar scenes with a new vitality. Released with the Major Arcana only in 2007, this long-awaited deck is now available in full from The Fool’s Dog.

David Higgins’ deck follows the pattern of the Rider–Waite–Smith Tarot, but with a more dramatic and theatrical sensibility. The Tarot archetypes generally have more dynamic body positions, and the characters meet our eyes more often. While many of the scenes are inspired by the Rider–Waite–Smith, there are also innovative visual metaphors that resonate with modern tastes: the Sacred Isle Death card is deeply metaphysical, and completely dissimilar to Pamela Colman Smith’s famous dark rider. 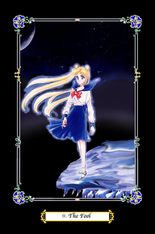